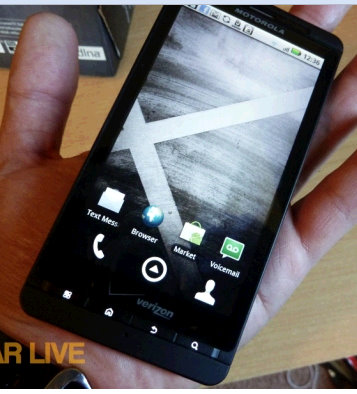 As Apple is reeling from all of the negative publicity generated from the faulty iPhone 4, not to mention the scathing negative review from Consumer Reports, there is another handset that is lurking in the shadows, ready to launch and attack the Apple iPhone user base.

That device is the Motorola Droid X by Verizon, and it’s release date is now less than 2 days away (July 15th, 2010).

Most people believe that the Motorola Droid X is the best response to the iPhone 4. The Droid X has a 4.3-inch touch screen, speedy processor and an 8-megapixel camera – the iPhone 4 has a 3.5 inch touch screen. Wow… that’s nearly a 1 inch difference!

The Motorola Droid X can also act as a WiFi source for up 4 WiFi enabled devices via the Verizon data plan.

Currently, the Droid X is running on the Android 2.1 OS but Verizon said they will be sending out an auto update to all Droid X customers to upgrade to the Android 2.2 OS.

So the Droid X is massive in size with a large touch screen that make watch videos, displaying apps, playing video games, browsing the web, and interacting on Facebook and Twitter more like being on a laptop than on a mobile phone.

What do you think – is the Motorola Droid X the best response so far to the popular iPhone 4?