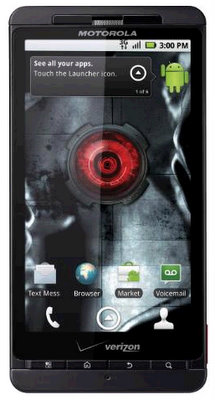 This is huge, literally! The Motorola Droid X with it’s 4.3 inch touch screen display is fixin’ to hit Verizon stores tomorrow like a tidal wave.

Unlike the Droid Incredible release that has plagued Verizon with supply shortages, Verizon doesn’t plan on making the same mistake with the Motorola Droid X. In fact, it’s been said that is you order a Droid Incredible today, you won’t receive it until this time next month.

But that’s not the case with the Motorola Droid X that is set to be released by Verizon tomorrow. PC World is reporting that:

“Verizon isn’t about to let the same thing happen to its highly anticipated Droid X. Checks by several blogs indicated average stocks of between 50 and 100 units. While not a lot, it certainly means in most cases if you’re there early, you’ll be taking home the phone that day. Boy Genius Report added that the company also has backup stock in its warehouse, so stores would be able to replenish the ones they sell.”

The Droid X will be powered by the Android 2.1 OS with an update to Android 2.2 and Adobe Flash Player 10.1 coming via an over-the-air update later this summer, according to Mashable.

So who’s planning on showing up tomorrow at Verizon to pick up the huge Motorola Droid X?