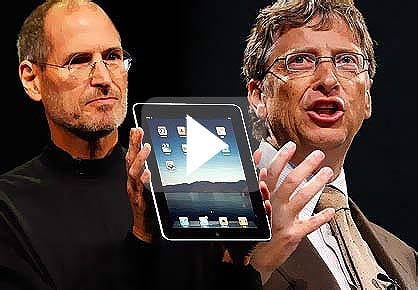 Some people say the iPad has already sold over 4 million units. Yeah, that’s a lot of volume, no wonder Apple is struggling with supply side economics, or at least was. I haven’t heard of too many supply problems so far since the iPad went global.

No doubt, the iPad has defined an entirely new market of computing. And now every other computer manufacturer is trying to play catch up, which can actually work in their favor. For now anyway…

One advantage that all iPad competitors have right now is that there are no iPad competitors on the market… YET! That is about to change however, because an onslaught of Android tablets are on their way.

The iPad competitors that are first to the market are the ones that are going to get all of the attention, all the write ups, all the blogger content, and thus all the sales.

Look at the Augen Android tablet that K-Mart launched. That was only last month, and it priced at $149. It got a ton of publicity simply because it was one of the first iPad competitors. But now it fell away from the market because of Android pirating issues.

It’s not going to take too long before the iPad competitor’s market is saturated with “another Android tablet.”

2 replies on “Why iPad Competitors Need To Act Now”

There are so many manufacturers wanting to compete with Apple and going to launch their tablets in the nearest future. It seems that soon there will be the tablet boom)